Send us a message

There are many physicians out there that claim to be proficient at liposuction. With marketing hyperbole and board certifications from unrecognized accreditors aside, you can determine the qualification of your doctor by this gauge. Ask for proof that he or she has privileges to perform the procedure that they are offering you in their office in a hospital. One of the scary facts is that if you are a physician - no one can stop you from doing procedures in your office that you feel you are qualified to do. Until of course someone gets hurt.

There are areas of the body that the liposuction surgeon must not violate. Disruption of the attachment of the skin to the underlying fascia causes the tissues to fall. These areas include the gluteal crease, lateral gluteal depression, middle medial thigh, inferolateral iliotibial tract, and distal posterior thigh.

Once you have had a complication of the contour after liposuction a frank discussion between you and your surgeon must take place. A plan for correction as well as the reality of secondary results must be addressed.

It should make sense that the more minor the deformity the better the secondary result should be. Small divots, minimal waviness, and minimal lumps all do well with secondary procedures.

Now that I have a deformity what can be done?First and foremost you should give the surgeon that operated on you the ability to try to fix you.
The principles of correction are simple. their execution is more difficult.

It makes sense that if we cause a depression from over resection that we should return volume in the form of Fat Grafts to fill it.

Scientifically we know that only 40-60% of the fat placed will live.

Liposuction creates scars inside your body that should be released.

A determination must be made if an area is asymmetric do to over or under resection or a combination. Fat should be grafted and aspirated accordingly.

Full thickness burns from liposuction that have sought out consultation with us usually are coupled with other deformities and show a lack of understanding of the technical aspects of ultrasonic liposuction. They occur within the aesthetic unit being liposuctioned and can be quite deforming. Conservative burn scar management consisting of compression, silicon sheet or gel, steroids and a multitude of Cosmeceutical salves. In general operative management can replace one scar for another and should be sought only in consultation with a Board Certified Plastic Surgeon. A few examples of Creative Options include:

Creative solutions may exist for different aesthetic areas and can only be determined in consultation.

This is a great case to show all aspects of secondary liposuction salvage surgery . A dermatologist in New York City operated on this young woman. She underwent tumescent liposuction in the standing position and had more than 3 liters suctioned off her hips and thighs. She was concerned over postoperative contour deformities (which could be classified as major) and asymmetry. After an attempt to revise her by the original doctor, she was still unpleased with her persistent deformities and sought opinions from several plastic surgeons in New York City. 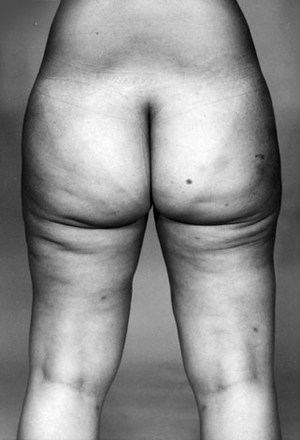 In her preoperative photos we see areas of over resection coupled with areas of under resection. Note: that in order to restore an aesthetically pleasing curve to her body, she needed to have multiple areas of fat grafting and in other areas liposuction. 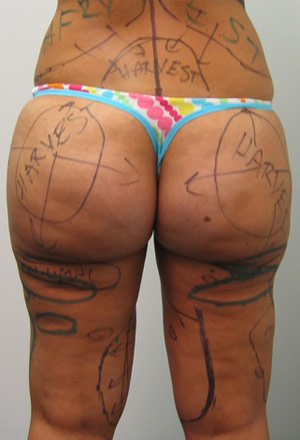 My operative plan reflected the above discussion and she is now several months out. We tend to pursue perfection in this profession and although she is tremendously satisfied with her result I am planning on placing some minute amounts of fat in some targeted areas to maximize her result in several months.