Send us a message

Classic Breast Surgery involves removing skin and tissue by creation of an “Inverted T” or “Anchor” scar. These techniques mostly relied on basing the blood supply to the nipple on an inferior pedicle of tissue. This has a great disadvantage in that the breast tissue that is removed comes from the upper pole of the breast. In today’s WonderBra generation women will go to great length to give the image of upper pole fullness. A critic of the older techniques would argue why perform an operation that by design does just the opposite. 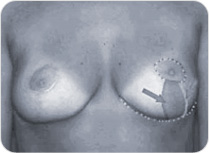 Short Scar Breast surgeries done by us are designed with two concepts in mind: